Art and Culture of Berhampur

Brahmapur is one of the most prominent and oldest places in the southern part of Odisha. While being merged during the British era with the Madras Presidency, a huge number of South Indians mainly Telugu and Tamil were employed in this region. This indirectly influenced the culture and lifestyle of the region. Berhampur is also known for its religious destinations including many temples such as Lord Sidha Vinayaka Temple, Sri Radheshyam Sunder Temple, Lord Nilakantheswara Temple, Lord Bhairabi Temple and many others. Thus one can see that the social and cultural ethics are still maintained by the people by way of their culture and lifestyle in Berhampur in spite of the urban developments.

Apart from the Hindus, Muslims, Buddhists and Christians are also found in Berhampur in large numbers. Even within the Hindu community, there is a huge diversity. For example, the Hindus are sub divided into various castes like Karans, Brahmins, Kshatriyas, etc. The unity in diversity found in Odisha is what makes it most commendable. People here along with their differences, belonging to various castes and religions live harmoniously with a feeling of brotherhood amongst them. 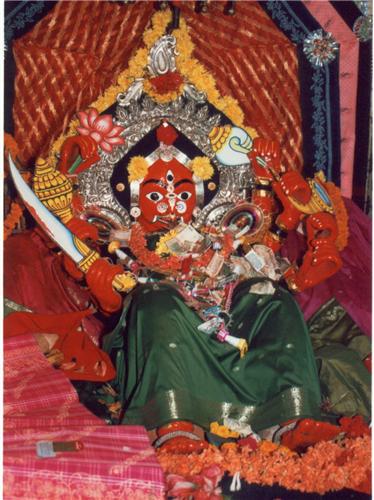 All the major festivals of India especially of Odisha is celebrated by the people of Berhampur. Some of the major festivals here include Diwali, Rath Yatra, Durga Puja, Kumar Purnima also known as Gaja Laxmi Puja, Makar Sankranti, Oriya New Year, Holi, Rakshya Bandhan, Janmastami, Saraswati Puja, Ram Navami, Ganesh Puja and many others. Apart from all the common festivals in India, there are also some festivals unique to this City Kumara Purnima or Sharad Purnima. In Kumar Purnima the girls do Janiusa Puja and pray for a good life partner to the Goddess Tulasi Maa. Every two years a festival is celebrated in honor of Thakurani Maa who is the main deity of the city. This festival is known as Thakurani Jatara or Yatra. Another festival celebrated here is Sitala Shashti Jatra which is the wedding day of Lord Shiva and Goddess Parvati is celebrated every year during the month of June. Apart from all these festivals, the other communities of the city including the Telugus, Punjabis, Marwaris, Bengalis and Gujaratis celebrate their own festivals along with the other major festivals.


Folk Songs and Dances of Berhampur

The folk music known as 'Loka Geeta’ forms part of life of the people. It is not always the same or standardized and may vary in tonality, scale, interval, etc. But the tone is identifiable across many regions. A folk song is perpetuated and inherited from one generation to another by oral tradition. The folk songs are so peculiar here that it makes every member of a community take an active part in any ceremonial function. The rhythms of such folk songs and the tunes come naturally to the people here and appeal directly to the heart. Apart from the folk songs many folk dance forms are also prevalent in Berhampur. The most sought folk dance form here is the Ghumura Dance or the Ghumra Dance which is depicted in Sun Temple of Konark that confirms its origin since the medieval period. Despite the penetration of modern music including the Hollywood and Bollywood songs, the folk songs and dances still hold their ground and are practiced during special occasions by the locals thus reflecting the culture of the city.

The city of Berhampur has a unique culture and the people of here are very religious and spiritual. This spirituality reflects and the culture of the people reflects well in the costumes as well. The costume of women in Berhampur includes traditional sarees and shalwar kameez. The silk sarees in Berhampur is very famous. Women here wear a variety of sarees during occasions which include Kataki Sari, Sambalpuri Sari and Bomkai Sari. These are adorned by the women here especially during festivals, marriages and other special festivities. Shalwar Kameez is also worn by the women especially the younger girls. Apart from the costumes, the women here like to accessorize themselves with a lot of jewelleries and other ornaments.

On the other hand, the costume of men in Berhampur also includes traditional outfits. Men here are seen wearing Dhoti, Gamucha and Kurta. The influence of the western culture can be seen in Berhampur especially in the clothing of youngsters. But the traditional outfits are still used and worn by the native here especially during special occasions and religious festivals.

The food in Berhampur is definitely worth the money especially for those who love spicy food. The natives in Berhampur love adding spices and chilies to their food. Apart from that the road stalls which sell such delicious spicy food; there are various restaurants, hotels and dhabas throughout the city. All sorts of cuisines are available for different budgets here in Berhampur. From delicious junk food to restaurant quality dining, all range of food is available in this city. The Girija Restaurant here is the most famous restaurant for its Chicken Pakoda, is a brand in itself. Apart from that, Hotel Nandan, Hotel Satya-sai, Samal dokan and Hari dokan are famous idli, puri and dosa hubs.