Berhampur being the major commercial capital in the southern part of the state of Odisha has a very well developed network for transportation. This busy city is well connected network of Railways, Airways and Roadways. The popularity and the city emerging as a trading center is majorly due to the easy connectivity to and fro the city. This is also among the major reasons for the development of the city. Even the tourists visiting this city can plan their tour by means of different modes of transport available within the city. These modes of transportation also can differ depending upon the budget and time available.

Berhampur city is well connected with the major cities of India via rail. Berhampur railway station located on the East-coast railway line is the main railway station of the city of which and serves approximately 135,000 passengers every day. This is a major route connecting two major metro cities of Kolkata and Chennai. It is also directly connected to other major cities of India including New Delhi, Bangalore, Ahmedabad, Bhubaneswar, Cuttack, Chennai, Mumbai, Pune, Nagpur, Puri, Kolkata, Vishakhapatnam, Raipur, Sambalpur and many other cities of India. The connectivity between Bhubaneswar and Berhampur that is the DMU is a popular connectivity for reaching the capital city of Odisha, Bhubaneswar.

Berhampur does not enjoy airways connectivity but the nearest airports are Biju Patnaik Airport in Bhubaneswar which is just 169 km away from Berhampur and Visakhapatnam Airport in Andhra Pradesh which is 256 km away. These airports are well connected to the other parts of India with the city. These airports have direct flights to and fro all the major cities in India. You can hire a taxi cab from the city to reach these distantly located airports. 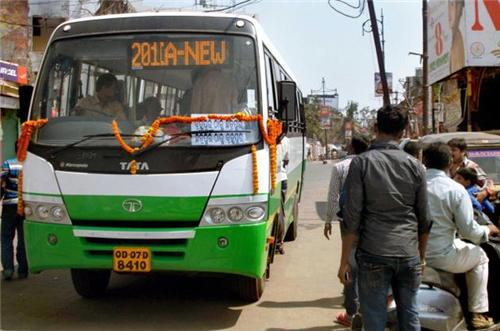 The roads in and around the city are being constructed in order to reduce the traffic overload and ensure that there is a smooth flow of traffic. Berhampur city has a good network of Buses which are maintained very well and ply from one point to another within city. The buses cover the entire city of Berhampur and are easily available at the designated spots. The fares of the Bus services are very reasonable and nominal and also depend on the distance of the journey. The Ganjam Urban Transport Services Limited or the GUTSL along with the joint partnership of Odisha State Road Transport Corporation or the OSRTC has come up with an agreement on February 27 in the year 2014 for running a city bus service for Berhampur to uraban centers on its periphery that is Gopalpur and Hinjli.

Berhampur city is also a good connected network via sea. This particular city is served by two ports that is the Gopalpur Port and an upcoming port at the Bahuda Mouth that is Muhan which is under construction by Paradip Port Trust (PPT).

Berhampur, the capital of Odisha is a city which is growing and expanding rapidly. Transportation within the city has many options and are easily available. The connectivity inside the city of Berhampur is not a concern as the city has a well connected network of roads. These roads connect the major institutions, industrial areas, station and airports. A number of Taxis, Buses and Auto-Rickshaws ply in this city that provides easy and comfortable public transport. The Auto fares range from Rs 15 to Rs.200 or more depending upon the distance covered. There are also share autos available here. The one traveling in a share auto can split the fare with the other travelers in the auto. The fare for share autos for an individual varies from Rs.10 to Rs.15 only, which may also differ on the distance traveled. The auto-rickshaws are easily available in the city especially during the times of emergency and urgency.Apart from this, the residents in the city also prefer to travel by their own vehicles like cars, motor cycles, scooters, etc.